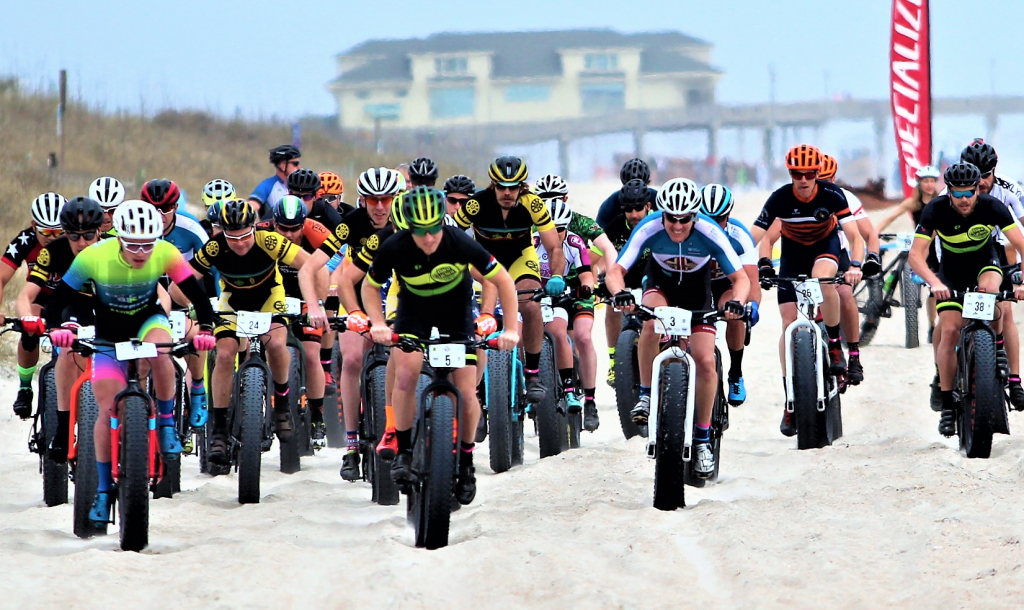 WRIGHTSVILLE BEACH, NC – Already the largest fat bike beach race on the East coast and named one of the Top-20 festivals and events in 2018 by the Southeast Tourism Society, the US Open Fat Bike Beach Championship may double in size in 2019.

“For the past two years the race has been limited to 100-participants,” said Shawn Spencer, Race Director. “We’re expecting a larger field in 2019 and had to raise the cap to two hundred.”

To accommodate the increase, Spencer plans to have two race times, segmenting the elite category from the intermediate and beginner groups, limiting each race to 100-bikers. “The elite racers will have the track alone for the first time,” said Spencer. “The elite, intermediate and beginner races will be more exciting with less congestion on the track.”

The 5th annual US Open Fat Bike Beach Championship will be held March 22-24, 2019, with activities and races based at host hotel Blockade Runner Beach Resort in Wrightsville Beach. Blockade Runner is expected to reopen in early Spring following extensive repairs due to damages from Hurricane Florence.

“We’ll have some cash prizes this year thanks to our presenting sponsor Alpha Mortgage,” said Spencer. “This will attract a higher number of elite racers.”

“The elite race requires conditioning beyond any other type of sport, plus the mental fortitude not to quit regardless of your suffering. It’s just hard,” said Spencer. “Skill is also needed to manage a fat bike through obstacles and tough terrain.”

“With two months to go, we already have 73 bikers signed up for the races,” said Spencer. “These athletes represent 39 communities in seven states, including North Carolina, South Carolina, Virginia, Maryland, Pennsylvania, Ohio, and New York.” Spencer expects a full slate of 200 bikers in 2019 and is awaiting registrations from Georgia, Florida, Michigan, and California.

The field of women in the US Open Fat Bike Beach Championship has increased from near zero to sixteen-percent over the past four years. The growth rate is expected to continue in 2019.

The competition will be equally fierce in the men’s division with a deep lineup of elite bikers seeking the top spot. A top contender to watch is 2016 champion Robert “Fear the Beard” Marion of Mount Airy (Cycleworks Xpedo Professional Mountain Bike Team), recovering from a 2017 bike injury.

“Athletes check-in Friday at Blockade Runner Beach Resort to inspect the race conditions,” said Spencer. “Saturday there will be a bike expo on the beach lawn before and after the races, followed by the awards ceremony. Competition includes a two-hour elite race; a 90-minute intermediate event; and a 60-minute race for beginners. Popular obstacles will be on the course this year with fresh surprises to challenge the bikers.”

Sunday features an optional 18-mile social bike ride on the beach from Fort Fisher to Bald Head Island and back.

“It’s amazing and very exciting to see so many people coming together to support the races and our community following Hurricane Florence. We are very grateful,” said Spencer.

The US Open Fat Bike Beach Championship will benefit the Wrightsville Beach Foundation, a nonprofit organization dedicated to improving public parks and amenities for residents and the island’s many visitors each year.