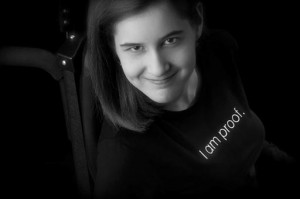 Raleigh, N.C…. Footpath Pictures’ “Certain Proof” A Question of Worth” comes home for its North Carolina premiere at the William and Ida Friday Center in Chapel Hill at 6 p.m. on Wednesday, November 2.

“Certain Proof,” written, directed, and produced in its entirety in Wake County by filmmakers Ray and Susan Ellis debuted in April during Colorado’s Vail Film Festival. The documentary has also been selected for screening by four other film festivals including the Dances With Films Festival in West Hollywood, Calif., the Seattle True Independent Film Festival, the Southern Appalachian International Film Festival in Kingsport, Tenn., and the Cucalorus Film Festival in Wilmington, N.C.  Recently, Susan Ellis was the guest of William Friday, who applauded the documentary, on his program “North Carolina People”.

“Certain Proof” sweeps its audience into the world of children who have good academic potential–some gifted–but are hampered by their communications and mobility challenges. These children have difficulties being included in the mainstream, especially schools. The film focuses on the battle of three mothers who fight with unrelenting passion for their children’s rights to a public school education and the teachers and administrators hamstrung by the bureaucracy of an education system with precious few resources to help them.

New Voices, a Triangle-based outreach foundation, serves children and parents, like the three featured in the film, evaluates the extent of their issues, prepares a transition plan, trains teachers, and follows the families with support. New Voices assists children with severe communication and physical disabilities–due to developmental disabilities, brain injury, cerebral palsy, and other issues–to maximize their learning potential through a program of short-term, intensive, individualized instruction. Inclusion–in all aspects of school, home and community life–with a transition back into a local school environment is the group’s goal.

Proceeds from the North Carolina premiere of “Certain Proof: A Question of Worth” will benefit the New Voices Foundation. Doors will open at 6 p.m. Remarks begin at 6:30 p.m. followed by the film’s screening and a wine and cheese reception. Tickets are available for purchase starting at $50 for sponsors, $25 for patrons and $10 for teachers and students.  To reserve, visit www.newvoicesnc.org.

“Certain Proof” is a collaboration of Footpath’s series of documentaries that shine the light of social awareness on health and human need, peace and reconciliation, education and the environment.