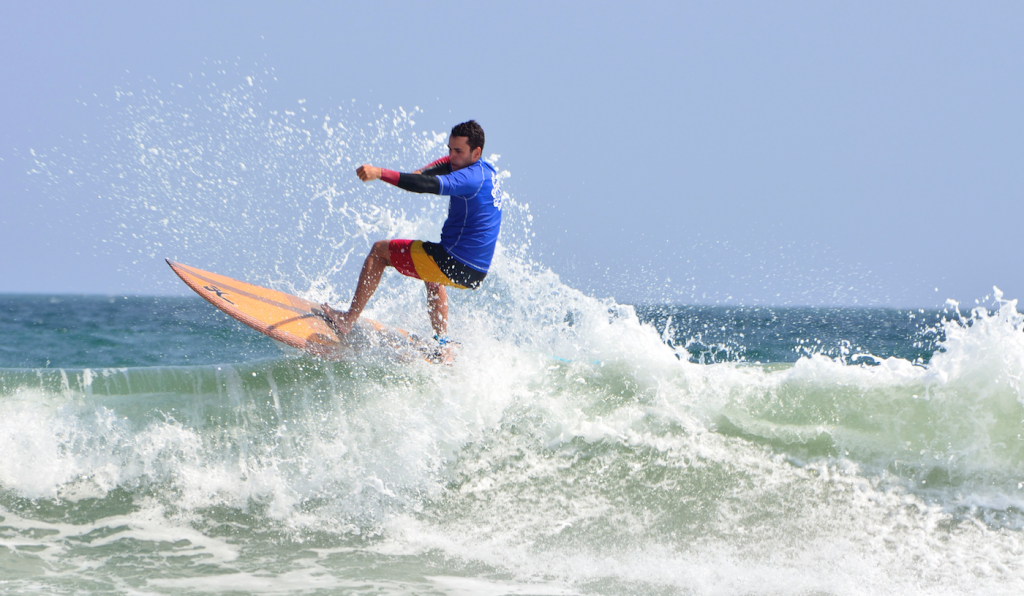 The Wrightsville Beach SUP Surf Pro Am is a prelude to this week’s 7th Annual West Marine Carolina Cup, the world’s largest gathering of professional and amateur paddleboard athletes, and a major stop on the World Paddle Association’s World SUP Tour. All races, clinics, demos, plus an expo and trade show will originate at host hotel Blockade Runner Beach Resort, April 18-23.

Letourneur’s career includes top-10 finishes in the Battle of the Paddle and Pacific Paddle Games, and runner-up in the French Championships in 2016. “I am very at home in these [Wrightsville Beach] conditions,” Letourneur said with a smile. “My home surf spot is always windy with small waves, so these conditions would actually be a very good day for us.”

Hawaii’s Mo Freitas wowed the crowd with style, grace and radical maneuvers to capture the top spot in the Men’s Professional Division for 2017. Following Letourneur’s second place finish in this division was Florida SUP Surfer and model Giorgio Gomez in third. Brazil’s Caio Vaz, just off a plane from his first place Ultimate Waterman Challenge SUP Surf victory and a crowd favorite in Wrightsville’s competition, finished in fourth place. The level of expertise and execution was so high, only four-tenths of one point separated the top four finishers.

Fisher Grant, of Florida, and Bullet Obra, of Hawaii, 2015 and 2016 All Waterman Award winners, were unable to secure a slot in the finals.

In the Women’s Professional Division, Florida’s Izzi Gomez bagged her third victory in a row, and also advanced to the finals of the mixed (men’s and women’s) longboard style SUP division. Izzi’s World Championship and ISA Gold Medalist skills were on full display. Surfing at an equally high level this year was Lexi Alston from Dana Point, CA. At 15 years old, Lexi took the runner-up in this year’s Pro Division. Fellow Hobie Team Rider, and North Carolina local April Zilg took third place ahead of Florida native Kristin Moyer. Kristin also won the Women’s Amateur division. Zilg is ranked tenth in the world in Women’s SUP professional racing and will be a contender in the Carolina Cup Graveyard Race this coming weekend.

The most inspirational performance in the Women’s Pro division came from the always-smiling Tanvi Jagadish. In a stacked finals heat of 5 women, Tanvi held her own and caught waves on a board completely new to her. Traveling all the way from India to compete in both the SUP Surf Pro Am and next week’s Carolina Cup, Tanvi’s dream is to continue to train and compete with the best women in the world despite social conventions where she lives. Already an inspiration to women around the world, Tanvi earned third place in the Amateur division.

New to this year’s event was the traditional Glider division, where participants rode surfboards that were 10’6” and longer. Three-time world champion longboarder Colin McPhillips took the win in this new division, as well as the win in the Longboard SUP open.

Full results are available at www.wbsupsurfproam.com/results.html