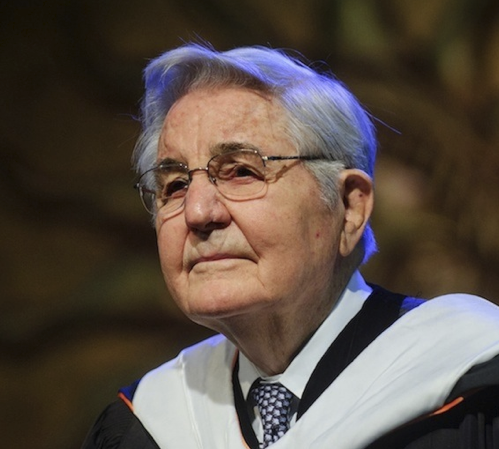 William C. Friday, president emeritus of the University of North Carolina and an icon of American public higher education, died peacefully in his sleep at home on Friday, Oct. 12, 2012.

Anyone who wants to understand philanthropy, and how to be great at doing good, can learn a lot from the life of William Friday.

Friday, who died today at age 92, personified public service for the common good.

A leader without peer in North Carolina, Bill Friday served for three decades as president of the University of North Carolina system, and then another decade as head of the William R. Kenan Jr. Charitable Trust.

In those roles, he did more than anyone else in the second half of the 20th century to help our state move from its agricultural and manufacturing roots to become a global pioneer and leader in higher education, digital technology, biosciences and social enterprise.

At the same time, he never ceased championing the need to address the most urgent needs of the most vulnerable among us, working to ensuring their access to food, shelter, health care, schooling and jobs.

Most important, Friday’s leadership was rooted in common decency, civility, compassion, humility and respect for individuals.

Bill Friday helped transform North Carolina from a land of farms and factories to an incubator for jobs, leadership, research and public service.

Much of North Carolina still struggles with crushing poverty and deprivation.

Anyone who wants to make even a dent in addressing those problems and improving our state and our democracy, should study the life and work of Bill Friday,.

He understood we all can be better if we work together, with respect and commitment, to make our communities better places to live and work.

Friday embodied the best of philanthropy: He served by leading, and he led by serving.